5 Resources to Attract Wildlife to Your Yard

Spring is around the corner! Now is the time to start planning for when you and your kids will be outside enjoying fun in the yard. Families will be again be spending a lot of time in their own yard this spring, so it’s the perfect opportunity to increase engagement with wildlife, insects, birds, frogs, and many other critters. There are 100’s of strategies you can employ to attract interesting critters to your yard and there is a plethora of information available to help you do it. Your effort will be rewarding by not only hours of enjoyment outside but will provide an easily accessible opportunity to connect your kids to wildlife and teach them about nature

Below are several resources that provide helpful ideas and instructions on how to plan your yard and gardens. It is important to plan ahead and choose plants, shrubs, and other installations that work well for attracting wildlife.

Now is a great time to do some research, put a pencil to paper and start planning. Getting your kids involved at the planning stage is a great way to engage them and teach the process. Plus, they will have some terrific ideas on what they would like to see in the yard. 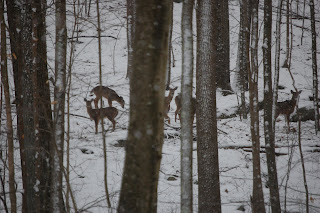 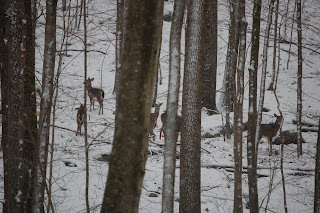 We have a large family of deer that uses our property as part of their home.  We have seen a doe and her six fawns and three bucks that pal around together.  They have provided my family with quite an education in deer behavior.  We first met the doe the summer we moved into our house.  At the time she had two fawns.  They were seen once in a while on the outskirts of the property, chewing the underbrush.  Each summer since, she has birthed two to three more fawns, which has made for quite a large family.

A brief note on deer biology
Female deer stay together as a family unit and the males leave to lead a somewhat solitary life.  Often they form a small group of two to three males, except during the rut (mating season).  I often see three bucks pass through our woodland and one day watched them for several hours while they were eyeing the doe and her female offspring during the mating season, though without much luck.

Overpopulation Wreaks Havoc
Needless to say, my shrubs and Hosta have paid the price with so many deer looking for tender morsels!  We see more and more of them every year, and in the past several months we have begun to see them several times per week.  I can only guess that they are being forced onto our property more often because they have less and less space elsewhere.  As the family’s population continues to grow, there will be less and less food for them, which means more damage to the forest underbrush and to our gardens.  As much as it annoys me that I never see my plants bloom because they eat the buds (I use deer spray regularly, but they somehow know the second it wears off), I feel sorry for them and the fact that they are overpopulated and starving.  Even the hunters we have in the area aren’t enough to keep the population at manageable levels.

Winter Entertainment
Ok, I got sidetracked…as I was saying they have provided much entertainment.  The family has been particularly fond of our property during snowstorms.  Each time we have had a snowfall, they bed down in the woodland behind our house.  They stay there for hours, waiting out the storm.  They are so unbelievably patient! As I watched the mother look over her brood quietly laying in the snow during the last storm, I couldn’t help but feel exasperated as I watched my own brood of two practically tear down our walls while they waited for the storm to end!

When it did finally end, my husband and I took the kids out to investigate the area where the deer were hanging out.  Here are photos of what we found:

1) Deer tracks in the woods 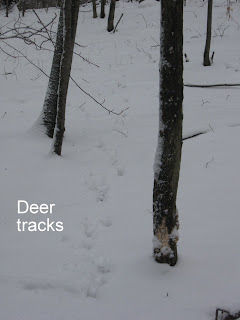 2) Deer beds where they patiently waited out the snowstorm 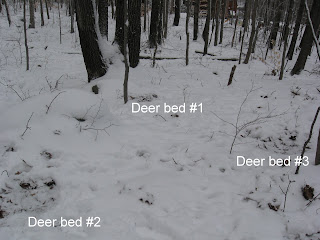 Here is a photo of my children being little explorers – I call them my “little peepers.” 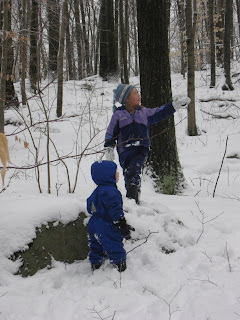 I am curious about whether you’ve had any experiences with deer.  Do you like to watch them, do they eat your gardens?  Do you hunt them?  Please post your thoughts in the comments section.

Fascinating Deer
What animal arouses more emotion, controversy, interest, anger, compassion and awe than deer?  They live throughout the United States, in the cities, the country and the suburbs.  Deer are magnificent and fascinating to watch if you are lucky enough spy one, can provide a delicious and healthy food source and can wreak havoc in gardens, woodlands and on roadways.  Grown ups know them for all of these qualities and, love ’em or hate ’em, they provide an awesome opportunity to promote nature appreciation in children.

Many species of deer make this country their home, but the one most often seen and known by people is the White-tailed deer. They are the the most abundant big game animal in North America.  Their habitat is mainly woodlands and they live in families made up of females and fawns or several males (except during mating season).  They are herbivores, meaning they only eat plants.  Deer make are an interesting topic because they are so familiar and at the same time so aloof.

It is interesting for children to watch families of deer if they live in your area. They are most often seen at dusk and at dawn.